The underwater explosion is a chemical phenomenon in which an explosive explodes under the surface of the water due to chemical reactions. The product of this explosion is a very hot gas (about 3000 degrees Celsius) with high pressure (14 to 28 MPa). When an explosion occurs, a wave called a pressure wave is formed, which if it is faster than the speed of sound is called a shock wave. 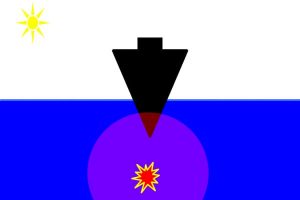 Accidents that occur in the marine environment can be prevented from recurring in the future by investigating the incident and carefully investigating it. In the past, for example, a single-walled tanker structure was built; But in light of the high number of oil tanker crashes over the past 100 years and the spill of large amounts of oil and other derivatives into the seas that destroyed many animals, in 1992 the IMO passed a law requiring all tankers to January 2014 Two bodies will be built. This law emphasizes the importance of taking a closer look at the proper design of high-reliability offshore structures. 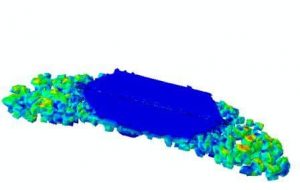 This phenomenon is more common in naval wars. Because an explosion that occurs underwater and near the bottom of a float is far more destructive than an explosion of the same size on the surface of the water. The initial destruction of the structure is formed by the shock wave caused by the explosion and then by the impact of a large volume of water and bubbles produced. If the explosive is enough and explodes just below the main bow of the ship, it will lead to complete failure of the ship and eventually sinking.

Contact our engineers in the company to order the project.