Design and determination of hydrodynamic coefficients of submarine propellers (SPP) 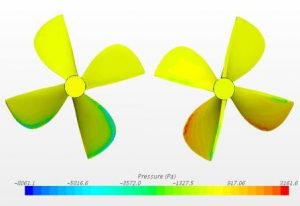 Design and determination of hydrodynamic coefficients of submarine propellers

Immersion of part of the impeller is usually done by extending the impeller shaft at the rear of the float, and placing the impeller at a distance from the ship’s wheel, where the water surface is relatively flat, hence to submarine impellers, the impeller is also called. One of the characteristics of semi-submersible propellers is the shallow depth underwater. This feature is the most important motivation of designers to design, design, and use surface impeller drift systems. The depth of the floating underwater can be less than half the diameter of the impeller. The geometry of the submerged impeller is somewhat similar in appearance to that of conventional impellers. The difference is that the blade cross-section is often designed to have a sharp beginning edge and a thick, stepped end edge. The sharp edge is designed with a low input angle. The impeller ball and the root of the blade are made resistant to excessive off-center and periodic loads. In addition to cavitation, another common phenomenon for hydrofoils and marine propellers is the Hawarse phenomenon. Vaporization occurs when the air above the free surface of water or exhaust gases from the mobile marine exhaust is drawn toward the lift surfaces and impellers. 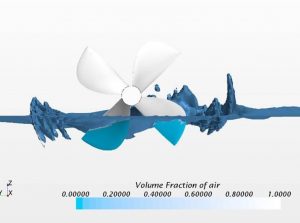 In this project, various parameters were examined and evaluated, some of which are as follows:

Our services in the field of marine industry can be seen in this link. See also design of various offshore structures and floating ballast water management. The company carries out engineering design projects, reverse engineering, simulation and analysis of various structures and offshore vessels. Contact a consultant and expert in this field.