The wind tunnel simulator is primarily used for aerodynamic testing and visualization of currents around an object. The wind tunnel simulator can assist the design and engineering process by optimizing lift and drag, increasing final speed, identifying and eliminating areas with high winds, and reducing noise for cars, aircraft, building plans, and construction operations; However, this wind tunnel experimentation is associated with increased prototype fabrication, increased fabrication time, and operating costs, and is sometimes accompanied by CFD simulation. In this service, we examine the virtual testing method as a solution to save time and money in designing and manufacturing equipment.

Architects and aerospace specialists use air tunnels to test everything from buildings to aircraft design. Wind tunnels are graded according to the speed of wind they can produce. In the test, the sample is placed in a wind tunnel and results from four aspects of aerodynamic forces, total wind force pressure on the body, currents around the body, and finally, visualization techniques to provide diagnostic information.

There is still no tunnel that can test a full-size passenger aircraft, but models can be tested in smaller sizes. Compressive forces in large aircraft are not easily measurable due to the large number of barometers required, and a single test can not provide the overall performance of the aircraft but can help the engineer to better understand the proper movement and displacement of fluid around and inside the model. For many aerial applications, wind tunnel testing has limitations such as Lack of temporally powerful results, inability to simulate real-world forces accurately. Virtual simulation with CFD and FEA provides this. The image below is an example of how wind simulation results help engineers compare designs with different materials that give a simple look at a complex structure. 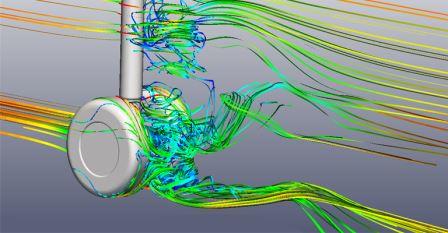 The engineers found that testing their wind tunnels allowed them to refine data on aerodynamic forces such as drag and lift, while model testing was smaller than prototype testing common in car factories. The cheaper model evaluation has been increasingly replaced by CFD, and the prototype aerodynamic test is used in parallel in vehicle development for virtual testing and prediction of various aspects of car design. 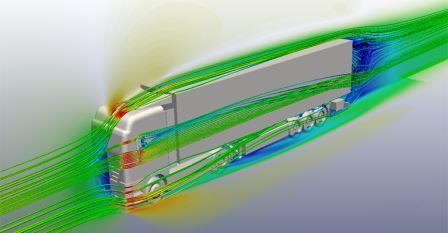 Since aerodynamics play an important role in the power of the car, good aerodynamics strengthens traction and reduces the risk of slipping and possible accidents, as well as reducing fuel consumption by reducing drag force, which saves costs for the customer. Emission effects of greenhouse gases such as carbon in the product. In designing a product, engineers increasingly rely on CFD results before designing the prototype, which evaluates and predicts the airflow around the vehicle, calculates high-pressure areas, wind speeds, and wake areas.

With the development of the construction industry and the increasing demand of the society for multi-story, industrial, and residential buildings, construction workshops have been greatly developed. In addition, the density of cities has become very high. Therefore, the only way to develop is to build tall structures. Tall buildings have become a standard. However, these buildings are measured by their ability to withstand wind loads, while the habitability of buildings to live or work is hampered by the effects of wind, such as vibration. That is why we use wind tunnels to test a building in terms of structure and wind bearing capacity for housing.

Simulation software has made this possible to meet standards and measure structural integrity and evaluate various aspects of wind load. Because interactions can also be considered. While wind tunnel testing for a building can not take into account its effects on neighborhoods and sidewalks.