With the emergence and growth of the global economy, demand for materials production and supply has grown dramatically in recent years. The use of different processes for the production of parts is increasing day by day so that more precise and fast parts can be produced in different and complex forms. These processes require careful design before being fully implemented. Today, numerical simulations are widely used in the analysis and analysis of these processes.

It covers a wide range of industrial processes to which all industries are dependent. Metal production processes such as Rolling, Extrusion, Forging, Welding, Powder Metallurgy, Machining, Casting, and Explosive Molding are the main processes.

All metal parts are manufactured by a variety of molding processes and methods. The forming process is an important part of mechanical engineer research to achieve the desired form of metals. The permanent ductility properties of metals make it possible to produce parts such as wires, beams, pipes, and so on. Due to the widespread use of deformed components in various industries such as automotive, rail, aerospace, oil, gas, segmentation, machinery, home appliances, and marine, high-quality components and high dimensional accuracy, low weight, and high strength are of great importance. Given this, familiarity with the different shaping methods seems necessary. Nowadays, new and well-known methods are used for molding processes, the most important of which are forging, casting, sheets, rolling, hydroforming, explosive, thermal, magnetic, etc… New forms of gradual forming, injection molding, etc. can be mentioned. 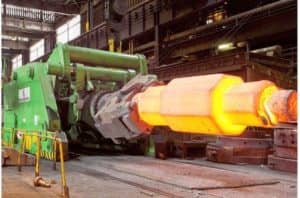 Forging is one of the oldest methods of metal forming. Most metals are capable of forging operations. In the past, the metal was heated to heat and then the molten metal on the hammer anchor was transformed into the final piece. Modern Forging has a similar basis. In this way, the raw metal or melt is positioned between the two molds and is subjected to continuous shock or force to form the desired mold. The process can be cold or hot (melted to a certain temperature). In this method, deformed parts will usually have better mechanical properties after the forging operation.

Casting is the oldest form of metal forming. This process flows through the mold or other forces through the gravity into the mold enclosure and, after cooling, forms the desired mold. So, melt flow into the mold, and melt freezing is the main steps of casting. Manufacturing parts with complex geometrical shapes and very large parts are the most important advantages of this method. Low dimensional accuracy and limitations in mechanical properties are also disadvantages of this process. Casting is divided into different types depending on whether the mold is open or closed, permanent, or temporary. The most important parts made by the casting method are the train wheel, car cylinder head, tool car body, jewelry, and more.

It is called a set of sheet forming processes, including shearing, bending, molding, etc… Shearing is the cutting of sheets between two sharp edges (punch and matrix). There are three main methods of shearing, blanking, and punching. Sheet cutting between two winning edges is called guillotine or shearing. Whenever the sheet is cut between the punch and the matrix, part of the sheet remains on the mold, and part of the matrix hole falls out. If the cut piece that comes out of the matrix hole is the desired piece, it is called a splash and if the piece is on the mold, it is called a punch.
In bending, the sheet is tilted around an axis to produce permanent deformation. The spring back that occurs after bending pressure is removed and due to the elastic energy remaining in the sheet is one of the most important design factors in bending. In fact, the spring back is the increase in the bending angle after the punch is removed from the workpiece.
Sheet molding To make cup-shaped pieces, hollow or hollow curves are called deep drawing. In this process, the sheet is placed on a hollow matrix and forms a mold by pressing the punch on the sheet. Kitchenware, dishwashers, military ammunition shells, various parts of the car body, etc. are among the products manufactured in this way.

One of the most efficient and effective shaping methods is the rolling process. In this method, the plastic deformation of the piece happens through the rollers. High production capacity can be considered as one of the main advantages of this forming method. Rolled pieces are usually the final product and ready to be delivered to the consumer market. Products such as bars, sheets, beams with different profiles, including rolling products. The rolling process is generally carried out in both hot and cold forms. In cold rolling, which mainly reduces the thickness of the sheet and results in increased hardness and yield stress, the process is performed at a temperature below recrystallization – room temperature up to 200 ° C. But in hot rolling, which is accompanied by a sharp decrease in cross-section, it occurs at temperatures above the recrystallization temperature – temperatures above 1100 ° C. In terms of rolling process design, rolling is mainly divided into four categories: longitudinal rolling, transverse rolling, screw rolling and cross rolling. 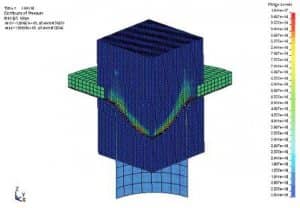 Explosive forming is a method in which the blast wave force is used to form the process. In this process, commonly used to form very large shells such as the body of ships, instead of making very large and costly presses and punches, the high-pressure wave of an explosion is used. In fact, the wave propagated by an explosion in a fluid, such as water, adheres to the sheet of metal that is in contact with the fluid on one side and on the other side of the mold with a balanced force on the sheet to form the end piece. The advantages of this method include reducing the cost of machinery as well as manufacturing very large parts, as well as incomplete shaping, explosion sound, and its dangers, and obtaining the necessary licenses to work with explosives… 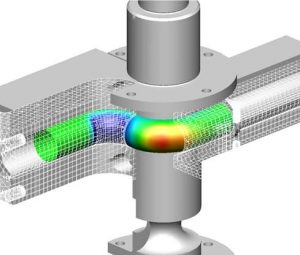 Hydroforming is a forming process in which the hydraulic pressure of the fluid is used to form the raw piece, depending on the type of piece, rather than the mold or punch. With the advent of computerized controls and high hydraulic pressure systems, this process has become a mass-produced method and is widely used to build components in the automotive, home appliances, petroleum, aerospace, etc. industries. The benefits of this method include improving the quality of the piece and reducing the cost of production. However, the use of this technology in the construction industry faces challenges such as the boundary conditions specified for the forming and properties of the materials, and in the case of inappropriate selection of the parameters affecting the process, there is a possibility of defects in the piece. The hydroforming process is usually divided into three categories, depending on the workpiece geometry: sheet hydroforming, shell hydroforming, and tube hydroforming.

In the sheet hydroforming process, the initial raw Piece, which is a metal sheet, is put into the hydroforming mold, and after the fluidization of the plate increases, the raw Piece takes the form of the mold.

In hydroforming, the shell does not require a mold. In this method, the sheets are first cut into special shapes and then welded together according to a certain pattern. Subsequently, this spatial polyhedron is filled by fluid and with increasing fluid pressure, the polyhedron is expanded and the final shape is usually spherical, oval, or hollow. These polyhedrons are commonly used to produce large spherical tanks such as water tanks.

Tube hydroforming is a closed-circuit forming process. In this process, hollow parts with different cross-sections are molded using internal hydraulic pressure and axial force. In the tube hydroforming process, the empty tube is first placed between the two halves of the mold and then the punches are driven to the proper position. The task of these pines is to axially feed and seal the pipes. Next, the tube is filled with a fluid inlet and the fluid pressure rises to the pressure required for forming. The pressure is then increased to its final value and as the pressure is increased, the punches push the sides of the pipe to the forming region to compensate for the decrease in the wall thickness due to its expansion. After forming, the pressure inside the tube decreases to the atmospheric pressure level and the punctures return to their original position. Finally, the given piece of form is removed from the mold